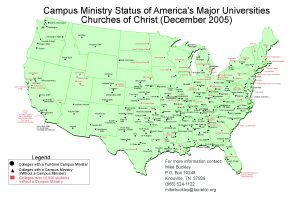 Campus Ministry United was founded in 2005 after Wes Woodell and Lynn Stringfellow attended the National Campus Ministry Seminar in Norman, OK that same year. At that seminar, a large banner displaying a map of the United States had been hung to the left of the main stage. On that map, the then-current locations of Church of Christ campus ministries had been charted beside a small sample of universities with an enrollment of over 10,000 where no ministry presence existed. The impact on Woodell - a campus minister in training who'd been led to the Lord only months before - was striking. Woodell describes the thoughts that ran through his mind while looking at that map: "I'd become a Christian because of a campus ministry; my wife had been won through the same campus ministry, and so had most of our friends. Where would we be if that campus ministry hadn't existed? And how many people like us were being missed because there weren't healthy ministries everywhere?" On the car ride home Woodell spoke with mentor and friend Lynn Stringfellow - campus minister for the Bay Area Church of Christ in Tampa - about his dream of starting an organization that would address this problem. It was at that time that the idea Campus Ministry United was born.

Harding University & Formation of the Campus Ministry United Board

Shortly after that experience, Woodell began pursuing a Bible degree through Harding University's Center for Advanced Ministry Training in Searcy, AR. During his time there he met Marvin Crowson - a former missionary and team-building specialist passionate about inspiring college students to give their lives to service in the Kingdom. Crowson found a kindred spirit in Woodell, and when he heard about Woodell's vision to begin a ministry-planting movement in the United States he was fully supportive and offered to fund the first CMU Workshop and assist Woodell in securing school facilities for the event. Shortly thereafter Woodell began calling on friends and ministry colleagues to form what would become the overseeing board of Campus Ministry United. The board was made up of campus ministers, evangelists, and educators who shared a common passion for carrying out the Great Commission of Christ on the university campuses of the United States.

The first Campus Ministry United Workshop (CMUW) was held in 2006 on the campus of Harding University. This Workshop was

deemed necessary because it was thought there was a need for an annual event for campus ministry leaders intentionally focused on evangelism and discipleship.

That need became especially clear when a 2006 national survey of Church of Christ campus ministries revealed that the average ministry was reaching almost no one. While the presentation of that idea was offensive to some then-current campus ministers, it became the rallying cry of those closely associated with CMU.

More than a Workshop

In addition to the Workshop, board members were working behind the scenes year round to advance CMU's agenda to plant ministries around the country.

In 2010, the Park Plaza Church of Christ in Tulsa, OK agreed to assist with Lynn & Carol Stringfellow's transition into full-time employment with CMU.

The organization was established as a fully functional 501(c)(3) non-profit organization with Lynn & Carol in charge of carrying out the important work of advancing CMU's agenda nationwide.

A Work in Progress

Today those of us associated with CMU are as passionate as ever about reaching the lost with the gospel of Jesus on university campuses around the country. We've learned a lot since 2005, and are committed to continue learning and working hard as we move forward.

What's as strikingly clear today as it was years ago is this: millions of college students around the world remain lost, and someone needs to make it their mission to share the love of Christ with them. As long as CMU exists, there will be men and women tenaciously addressing that need.

Next --> CMU Board of Directors